Scarab, unmistakable symbol of Egyptian culture, has always been used as a protective amulet.
Made of different materials more or less precious and valuable, it is commonly known in its most popular version: the particular shade of blue of the scarab (Egyptian Blue) since ancient times was made from a mixture of silica called faience.
The faience (Egyptian faience), now increasingly rare and sought after, is an amalgam of clay then coated with a thin glazed layer, like the majolica, material far more unobtainable and typical of Faenza handicrafts (Faenza and hence the name in French): this glass material has a ‘softer’ core, while the exterior is made from tough and scratch-resistant glass coating.
Known already in the pre-dynastic period prior to 3150 BC, the faience is not to be confused with the ordinary chalk, less valuable and much less expensive substance with which the majority of the Scarabs are made today.
Mounted on a waxed cotton lace in a dark green shade and adjustable in its length, the necklace is finished with two spheres in colored wood.
Each Scarab, being of handicraft production, can have different shape and size. 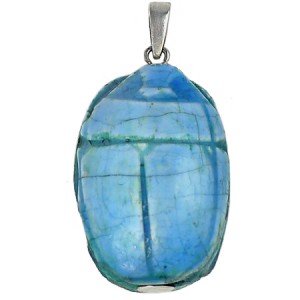 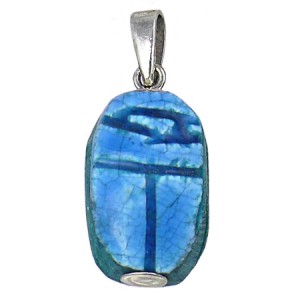