Claddagh Ring, the traditional irish engagement ring.
Its origin dates back to the XVIIth century when it was a traditional gift that mothers gave to daughters on their wedding day. From the XVIIIth century it was used also to symbolize friendship, and nowadays it is still very often used as a wedding ring. There are severals interpretations about its symbology: a legend says that the right hand is the symbol of God Dagda and the left one symbolizes the Goddess Anu (the Great Mother of all Celtic tribes) and that the central heart represents the fruit of their love: Humanity. Another interpretation sees in the hands the symbol of Friendship, in the crown the Fidelity and in the heart the symbol of Love. As for its origins a legend says that Claddagh was the name of an ancient Irish king, who fell in love with a poor girl. His family impeded his wedding with the girl and the king died of sorrow and grief. Just before his death the young king asked the court jeweller to create a ring with two hand united, holding a heart. He intended to remind all irish lovers his sad sad story.
It is said that the first Claddagh ring had been branded by Richard Joice late in the XVth century.

Available from size S – English standard – for sizes under S please see the women’s version AR10Wgold.
As it is an hand made piece of jewellery, please consider that it might take 10/20 days to have it done.
It is available also in white Gold. 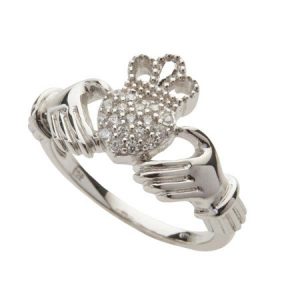