China has 1 billion and 300 million inhabitants; of these, 92% belong to the Han Chinese population while the remaining 8% is divided into as many as 55 different ethnic groups, withdifferent culture, tradition and language.
Therefore speaking of Chinese jewelry itself is a forced generalization that necessarily involves a further analysis which falls into the specifics of the various ethnic minority groups.
This work is especially important because for these populations the jewels are integral part of traditional costumes, and are the protagonists of festivals and ceremonies. It is no coincidence that in 1 yuan and 5 jiao banknotes there are profiles of women in popular costumes and jewelry, the same people we can still see nowadays.

For thousands of years Miao, Dong, Shuni, Yi, Li and Yao peoples have been living from agriculture and moving within the Asian territory in search of fertile lands; only during the nineteenth century they have become sedentary, concentrating mainly in the southwestern part of the country, and have been studied and catalogued by the Central Government of China. In fact some of them have an ancient language and a millennial pictogram alphabet; others did not have a written tradition, but only oral, and sometimes the codification of their language has led, in the mid twentieth century, to the creation of multiple alphabets, both pictographic and syllabic, sometimes even Latin.

While in the majority population, the Han, the favorite materials for ornaments are jade, gold, silk and ivory, for ethnic minorities silver is the main protagonist.
The richest families can afford very complex and heavy silver jewelry, while the lower classes have to be content with mixed metal alloys that simulate white silver. One of these alloys is nickel silver, an alloy of copper, tin and nickel, invented precisely in China, but also used in Europe to make cutlery and utensils, and sometimes also called “German silver.”
Both men and women wear silver jewelry and ornaments everyday, but on holidays they wear them all in all their glory.

Men jewelry are mostly big bracelets, chains and button decorations to apply to headgear, clothing and belts, while women jewelry are definitely the most elaborate and impressive, used to adorn beautiful hairstyles, clothing, ears, neck, temples and arms. Necklaces are often rigid, circular or semicircular and sometimes of truly remarkable size. Women also often wear a back pendant, its shape usually spiral or multi-faceted.

Another difference between the Han goldsmith tradition and the ethnic minorities’ one is that the former have a strong reluctance to pierce the body, because they think it is a divine gift to cherish and respect; while the latter can carry elaborate fish hook earrings sometimes of considerable weight, even more than 700 grams per pair. Even necklaces can be very heavy, up to 5 kg each; sometimes the wealthiest women wear, in the main traditional festivals, up to 15 kg of jewels!
The grandeur, beauty, and the amount of silver jewelry shows clearly the status not only of the woman who wears them but also of her family, therefore parents usually give their daughters a dowry of silver jewelry that can cost the equivalent of a year’s work.

In Guizhou province, in southwestern China, the silversmiths are numerous but, according to the seasons, work in the fields as well. Many have learned the profession from their fathers and
grandfathers and some are temporary employees for the government, when not working in the fields.
Silver is sold annually by the Government to the silversmiths of the ethnic minorities, even in the most remote parts of China, in established quantities.
There is no punching required, such as for Western silversmiths, but sometimes appear punches bearing the name of the silversmith and the name of the owner.
In many villages the silversmith’s techniques are very rudimentary: the forging of metal is done by hand using artisanal kilns, and bellows and other tools are also artisanals; furthermore each silversmith creates with his hands the silver thread, and realizes himself the lead molds which serve to melt the metal to create plates and pendants. This aspect makes each piece of jewelry a unique identifier of the manual skill of the craftsman and the taste and wealth of the buyer.
Most of the jewels are made by working metal wire of various thickness, of circular section or parallelepiped section, twisted and braided to create to create plays of “lunar” light sometimes of
reat charm and beauty. The fusion is often used to make geometric pendants or straps decorated with bas-reliefs.
Rarely the silver plates are worked with repousse or chasel techniques, so the weight of the metal
increases dramatically.

The most commonly used decorative technique is the incision, that runs thickly over the entire surface with a sense of horror vacui, often making the object vibrant, thanks to the fact that it is still hand-made with various burins.
The patterns are related to the myths of the ethnic minorities’ tradition and to their everyday life.
Some common elements are the dragon – male or female – positive symbol by the changing shape,
depending on the culture in which it is located: dragon-man, dragon-fish, dragon-silkworm, etc; other symbols are the butterfly; the fish, a powerful symbol of prosperity and fertility; the water buffalo and its horns, which often are also found in the large female headdresses; finally, stylized lotus flowers. Among the symbolic animals belonging also to the Han culture appear the phoenix (fenghuang) and the lion (shishi); while among the religious symbols we find the Buddha and the Dao with the symbols of Yin and Yang.

It is unfortunately very difficult to find Chinese silver jewelry of ancient workmanship because during the Cultural Revolution (1966-1976) wearing jewelry was forbidden, and the existing ones were melted. Even the beautiful women’s hairstyles disappeared together with hairpins and combs, because everyone had to wear their hair short.

With the end of the Cultural Revolution jewels could again be produced, and time had made communication and exchanges much easier; thus the various ethnic minorities have shared many
stylistic and figurative elements making it more difficult to create, nowadays, safe and distinctive
classifications. 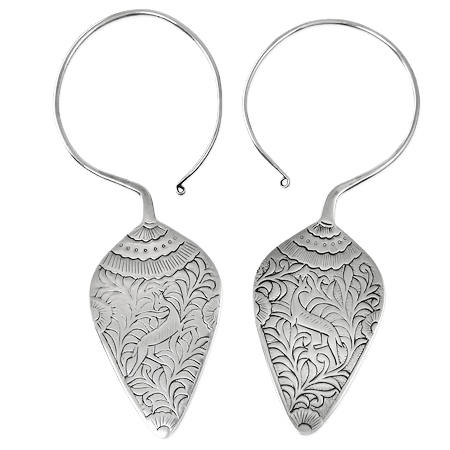