ALL NEPALESE JEWELS ONLINE FOR SALE

In Tibet, as in all countries where jewels have not only an aesthetic function but a symbolic andapotropaic value, jewelry accumulate on clothes.
Most of the jewelry is in fact made with symbolic stones and organic elements, both selected for their protective, miraculous and religious powers.

Therefore amulets and pendants are often reliquaries that contain spells, incantations and prayers.
The reliquary pendants may have various forms: round, square, oval or mandala, made of gold, silver or copper. In order to increase their value, the surface is often densely embellished with symbolic decorations, engraved or embossed. 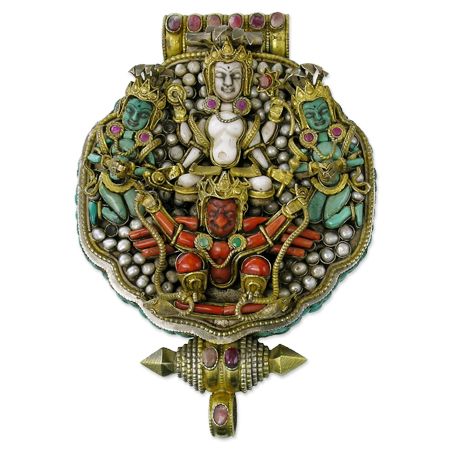 Jewels in Tibet represent a strong status symbol and, for this reason, the caste of officials, noblesand wealthy families are willing to pay large sums to wear them and to let their women wear them. With the exception of the period of government of the XIII Dalai Lama (1929-1933), which had imposed strict rules and expenditure restrictions regarding jewelry, since ancient times to lay Tibetans wearing jewelry was not only a pleasure, but also a moral and institutional duty, which included ridicule and sometimes even the imposition of sanctions for the non-compliants.

Necklaces can have really impressive sizes with large gems including amber, coral, turquoise and white and black agate.

Black agate is the material of which beads called Dzi are made, with characteristic patterns in black and white that, depending on the shape that they create, assume a precise meaning and value. The term Dzi in Tibetan is associated with light and brilliance (the semantic root is ancient and shared by many peoples, for example, is the same of our word for light, but also of the term god, Caesar and Czar). These pearls are very important in Tibetan culture: their origins are believed to be mythological, according to ancient legends which may vary from province to province. Some tell that dzis are derived from the excrement of a mythical bird that feeds on precious stones only; others that they are petrified insects; others that dzis are pearls thrown bythe gods on earth because of their flaws, while they keep the beautiful ones for themselves.
In necklaces, the Dzi beads are often worn as principal and central pendant, frequently inserted between two or more coral beads. 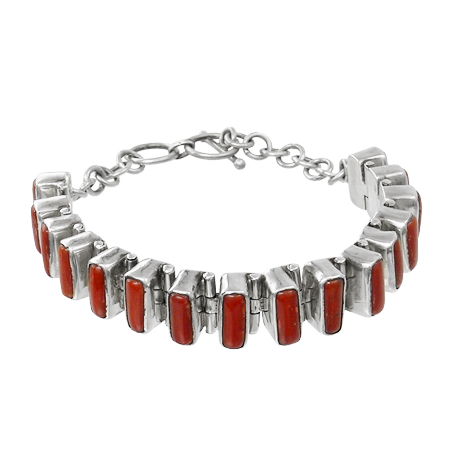 Since antiquity the most valuable variety of coral came from the Mediterranean and was reserved for the wealthier social classes; in fact coral beads, generally cylindrical curved, can assume sometimes truly impressive dimensions.
The Venetian merchant Marco Polo, in the thirteenth century, already noted that both women and men used coral for necklaces, to adorn idols and also for their hairdos. In the province of Qinghai and in the North East of Tibet, Ando women divide their hair in 108 braids, auspicious symbolic number in Buddhist culture; while Kampa men weave their hair with red tassels and wrap them around their head.

Such hairdos are decorated by inserting decorative fabrics and pendants of various shapes and materials; among these the most common are coral, turquoise and amber, that can be put in the hair in the form of simply trimmed and drilled beads, or embellished with silver frames, engraved or embossed.
For Buddhists the blue color represents the sky while red is the light, and these two symbols combined together represent the whole set of natural energies.

The turquoise is in fact another material that Tibetan jewelry cannot fail to include, because it represents a summation of all the spiritual, physical and symbolic values. The turquoise is used both in the form of slightly beveled and perforated rough beads, used in necklaces, or as polished plates cut in various forms and used as pendants for earrings, necklaces and headdresses.
Many jewels are made of silver, gold or gilded copper, where the turquoise is set in sections of different size and shape to create a mosaic. Women wear gaudy earrings in turquoise mosaic, while men carry at least one earring in the left lobe in the belief that otherwise they could be reincarnated into donkeys.

Another protagonist of Tibetan jewelry is amber, fossilized resin believed to possess healing powers against jaundice. Baltic amber, arriving in Tibet through Russia and Turkestan, is the most popular, due to its particular shade of yellow. All of these gems can also be embedded in sheets sewn on clothes and on metal belts used to secure and close the garments of traditional clothing, made of fabric in summer and of sheepskin in winter.

Tibetan monks have a very sober clothing, warm colors in shades of solid red and orange, and generally do not wear jewelry except a particular “rosary” in grains of various materials, worn between the wrist and the hand to recite various mantras.